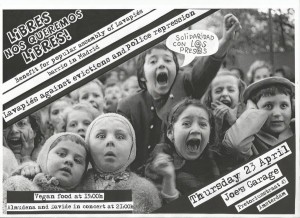 In our neighborhood, Lavapiés (Madrid), there is always an helicopter
surveying the area. It is part of the state of fear and shock they try to
impose. They arrest us, they issue fines against us, they search for us in
our homes, they put us in jail…but that will not stop us, because our
solidarity is strong and for real.

We are facing an increase in the repression from the Spanish government as
it was in the Eighties. Activists from different movements are locked up
daily (anarchist, members of independantist movements, feminists,
communists, housing activists, squatters …) Nothing new, what else is to
expect from the government? Even if that has always been the case, it is
true that there has been an increase of the repression. This is partially
explained because there is a certain fear from the power of these seeds of
self-organization coming from the neighborhoods. These activist movements
are steadily increasing and stopping evictions, producing in different
ways, creating solidarity networks, transforming plots into kitchen
gardens, trying to find and experiment ways of getting away step by step
from the usual commercial networks…and that is scary for the power. The
power reacts wickedly against movements, against this solidarity among the
oppressed.

The Asamblea Popular de Lavapiés (people´s assembly from Lavapiés
neighborhood) is a collective attempt based on self-organization and
mutual support. It is an open organization from the inhabitants of the
Lavapiés neighbourhood in Madrid. It started back in Spring 2011, emerging
from the “15M” activist movement occupying squares, camping in the cities´
public spaces, generating public and open assemblies…We are together since
then, facing and finding solutions for many of the problems in our
neighborhoods: evictions, racist police raids, real state speculation,
male-chauvinism, job insecurity, gentrification, etc…But from this
neighborhood initiatives, there has been other outcomes: a public
vegetable garden, coops or the Public Women University….

The government has brought charges against more than a ten of the members
of the Asamblea Popular de Lavapiés: due to the first protest of the “15M”
movement, for demonstrating against the police racist raids (our migrants
neighboors are constantly suffering racial profiling from police and even
a stronger harassment), for stopping evictions and due police set ups.
This is without taking into account other sorts of government repression
(administrative repression). Even if it may look like, we are not the most
punished and repressed activist movement in Madrid.

Nevertheless, we are not frightened by their repression, we feel even more
united, we feel even more aware of what we are fighting against. We have
created “resistance boxes” to save money to face all this and as well
formal and informal support networks. There are counter-information and
supporting campaigns. We know that solidarity among us is our strength.
With this “resistance boxes” we can fund the support for the trials, the
fines, the administrative repression from the government. Thanks to this
mutual support we can carry on with our actions, increasing and extending
the areas of our lives covered by the self-organization, taking them back
from whom intend to take life and freedom away from us.

We shall be free, we shall have the freedom to keep on fighting and
creating a different world,