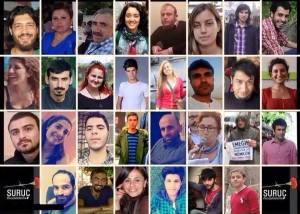 The anarchist group Amsterdam, want to send our condolences and sympathies to everyone affected by the savage and cruel act of violence that was the bomb attack on Suruç.

It would be nonsense to say here that the killing was senseless or to ask why these people were the target of this bomb attack, because we understand. The people that were killed or wounded by the blast are those that stood up and were ready to take action against everything the Islamic state, and ultimately every state, stands for.

The death of these people is felt strongly by us because we feel we share much of their frustration and anger at injustice and oppression. Their passion and commitment to bringing closer a world of equality and freedom is an inspiration to us but it makes their deaths and injuries all the more painful.