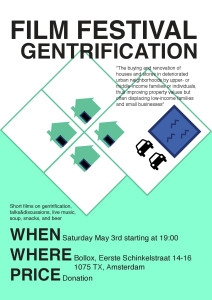 ‘Gentrification’ is the term used to describe the arrival of wealthier people in a neighborhood, the related increase in rents and property values and the inevitable change in the culture and character of a neighborhood that comes with it.

With mounting rent prices, a decrease in social housing and a rise in police intimidation, lower-income residents are forced out of the neighborhood. This global phenomenon is visible in various stages in different area’s of Amsterdam such as; De Pijp, De Baarsjes and Amsterdam Noord.

On May 3rd, we’ll be organizing a small film festival at the Bollox, on the topic of gentrification. To come to a better understanding of the process and to talk about strategies to counter it’s destructive consequences.

In addition to a selection of short films, we will be discussing gentrification in Amsterdam with one or more speakers. There will be live music, soup, snacks and beer!